This is a slightly modified and hyper-linked excerpt from my new book ‘Technology vs Humanity’.

Find out more about  ‘Technology vs Humanity’, check out the reviews, read the cheat sheet, or buy the book on Amazon.

Here are some core human rights that I humbly suggest might form part of what I call the Digital Ethics Manifesto:

1. The right to remain natural, i.e. ‘merely’ biological and organic. We must continue to have the choice to exist in an unaugmented state. We need to retain the right to work or be employed, use public services, buy things, and function in society without the need to deploy technology with, on or – most importantly – inside our bodies. Various expressions of what I like to call #WiredOrFired – fears are already an issue with mobile devices and social media; yet one can easily imagine a future where we may increasingly be forced to wear augmented reality AR or VR glasses, visors, or helmets to qualify for employment, or even worse, be required to use or implant specific ‘wetware apps’ or BCI’s (brain computer interfaces) as a non-negotiable condition of employment. Mere humans may soon no longer be good enough—and somehow I don’t think this would be a very desirable future.

2. The right to be inefficient if, when and where it defines our basic humanness. We must have the choice to be slower and less capable than technology, and we should never make efficiency more important than humanity. While it may very soon be vastly more efficient and much cheaper to use digital health diagnostics via platforms like Scanadu rather than to see a doctor every time I have a medical issue or need a checkup, it should not become the only ‘approved’ way to do so. I believe these technologies are mostly a good thing and may well be one of the keys to lowering the cost of healthcare, globally; however, does this mean we should penalize people who choose to do otherwise, or force compliance upon those that don’t want their health data in the cloud?

3. The right to disconnect. We must retain the right to switch off connectivity, to “go dark” on the network, or to pause communications, tracking, and monitoring. Let’s consider the likelihood that many employers and companies are certain to make hyper-connectivity (AR, VR, and even BCIs) a default requirement in the near future, or that drivers may become liable for ‘unauthorized disconnection’ if they can no longer be tracked on the network. I believe that to be independent, self-contained and disconnected at the times of our own choosing is a fundamentally important right because disconnecting allows us to refocus on our unmediated environment and to ‘be in the moment’ which is essential to human well-being. It also reduces the risk of digital obesity and lessens the reach of surveillance. Offline may indeed be the new luxury, but it should also be a basic digital right.

4. The right to be, or remain anonymous. Even in this coming, exponential and hyperconnected world we should still have the option of not being identified and tracked, such as when using an application, a bot or a platform, or when commenting or criticizing, provided it is harmless to others and does not infringe on anyone else’s rights. Sure, there are some obvious occasions where real anonymity would be impossible and probably unreasonable to expect, such as with online banking and financial transactions. However, we should make sure that protected spaces remain, where complete tracking isn’t required or the norm, such as when voicing political opinions, sharing personal pictures, or getting medical advice. Anonymity, mystery, serendipity, and mistakes are crucial human attributes we should not seek to remove by technological means.

5. The right to employ or engage people instead of machines. We should not allow companies or employers to be disadvantaged if they choose to use people instead of machines, even if it is more expensive and much less efficient. Instead we should consider providing tax credits to those that do, or stipulate automation (robot) taxes for companies that dramatically reduce the number of employees in favor of machines or AI. Those new funds could then be made available to retrain people that became the victims of technological unemployment.

How much freedom are we willing to sacrifice in order to be either more efficient… or more secure?

Go to ‘Technology vs Humanity’, read the cheat sheet, or buy the book on Amazon.

Some relevant  gifs (reuse OK under creative common) are here 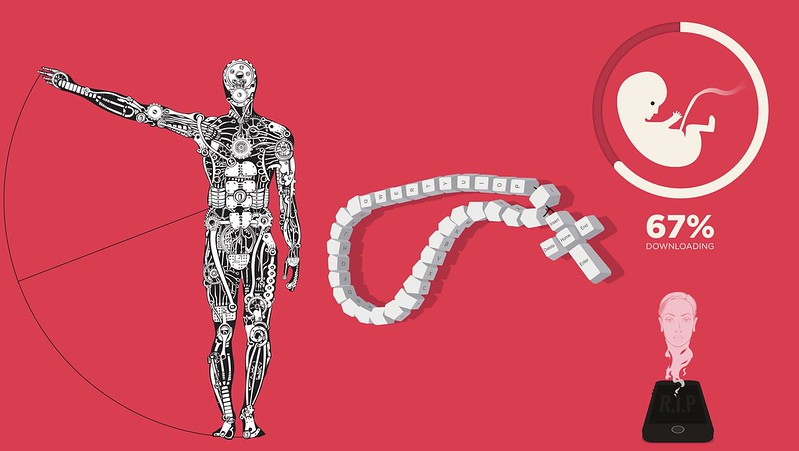 The experience economy is booming, but it must benefit everyone (WEF 2019)

The 15 “We shall not” statements from my latest book, Technology vs Humanity – and what has happened since I published it