The European Commission takes aim at AI: the AI-GDPR is coming? (good read via Politico) #digitalethics 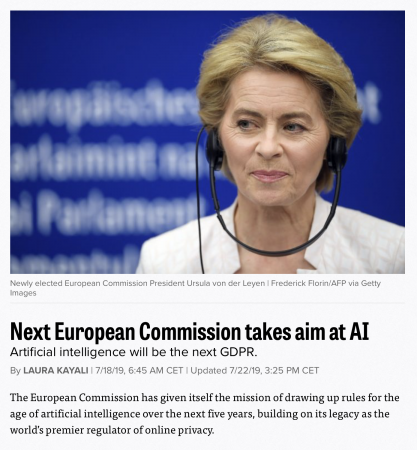 regulator of online privacy. With Europe trying to catch up to China and the United States in developing AI, some researchers and tech companies have warned against hard rules they say could slow innovation. But top EU officials are undeterred. Ursula von der Leyen, the next European Commission president, has joined national governments and EU digital policymakers in calling for hard rules to govern artificial intelligence, sooner rather than later. “In my first 100 days in office, I will put forward legislation for a coordinated European approach on the human and ethical implications of artificial intelligence,” the German former defense minister, who was narrowly confirmed by the European Parliament this week, wrote in her agenda for Europe.”

Read more about my work on these topics:

The Real Reason for Facebook’s New Cryptocurrency (must-read by Kevin Werbach, in the NYT)

Some of my key visuals used in my recent talks