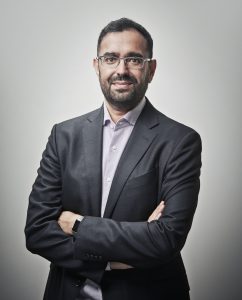 Azeem Azhar is a strategist, analyst, product entrepreneur, influencer and writer with a passion for all things technological. Currently he is also Senior Advisor in Artificial Intelligence to the CTO of Accenture, a member of the World Economic Forum’s Global Futures Council on Digital Economy& Society, Advisory Member of HFS Research & Advisor at CognitionX.

Azeem runs the very popular newsletter on the societal implications of technology called Exponential View which has garnered more than 30k subscribers including investors, academics, and journalists around the world. Up to recently Azeem was also the Vice President at the global media company Schibsted Media Group.

Previously, Azeem has been an award-winning entrepreneur, backed by VC, with a successful exit; an investor in many tech startups, especially in the AI sector; held corporate strategy roles at Reuters and the BBC. Azeem has spoken on TV and radio (BBC, Sky, CNN, amongst others), FT Columnist and lectured or spoken at LBS, Harvard, TechCrunch, WHU Founders Conference, Medialaan, Deutsche Telekom, Vodafone, Oracle and dozens of other places.

The early part of Azeem’s career took him to journalism, where he held corporate roles at Reuters and the BBC, and served as an editor at The Guardian and The Economist

Previously, Azeem has been an award-winning entrepreneur and an investor in many technology startups, especially in the Artificial Intelligence sector. Azeem speaks on television and radio (BBC, Sky, CNN amongst others) and has lectured or spoken at London Business School, Harvard, Techcrunch and dozens of other places.

In 2017 Azeem was accepted onto the editorial board of the Harvard Business Review and from March 2018 Azeem was appointed as a member of Cairncross Commission for Press Sustainability, acting as an advisor on the future of high quality journalism.

Brilliant Minds on the Future – https://www.linkedin.com/pulse/kai-fu-lee-chinese-entrepreneurship-azeem-azhar/

Get in Touch with Azeem Azhar